A Different Kind of Break-Up

I’m in my pre-column-writing phase, meaning that I walk around hearing voices like some lesser Joan of Arc. Take the rubbish out – hear opening sentences in my head. Stand in line at the supermarket, stare at miniature bottles of Jägermeister and super-size packs of gum – hear possible closings, try to capture them and keep them until getting home again.

Not ready to write. Not yet. But soon. It’s like warming up for a race. Stoking the fire with words or images, feeling the writing muscles flexing and getting stronger. Writing is like running. Sitting down at your computer, opening a new page: it’s like lacing up your shoes and heading for the starting line. You’re ready to begin at last. A writer is a sprinter, a middle-distance or long-distance runner. A writer is an athlete. An athlete of the mind.

Late in the evening, Berlin time, I email my editor in New Zealand. All editors treat deadlines differently. Some choose the first of every month. Some – super-precise – send you lists of specific delivery dates for the next six months. My current editor is my favourite sort: organised but relaxed, efficient but approachable. She’s the sort of person you hope will be a Parent Helper when your kid goes off, crying, to school camp. ‘Just wondering,’ I write, ‘what the deadline is this month?’ I’m hoping she’ll reply, ‘Actually we’re running late already. Can you get it to me asap?’ Because even when you’re ready to start, a deadline is a helpful spur – a sharp kick in your flank, sending you leaping into the first paragraph.

I don’t get the hoped-for reply. I get no reply at all. Finally, in my Spam folder, I discover an automated response – which includes my editor’s personal email address. This is kind of unusual. I paste my deadline query into a new window, push Send again, and go to lie on my sofa. I feel – odd. Uncomfortable. Do I have some sort of writer’s indigestion? Too full of words? Henry James said that a writer should try to be someone on whom ‘nothing is lost’. I attempt to pin down and identify my unease, so I can process it – and thereby get rid of it. Henry! Are you there? Tell me what’s going on! I close my eyes and read the thought-out lines in my head. Repeat already-known phrases to calm myself. I’ll start writing just as soon as I get editorial instructions. A writer is a processor of emotions. A writer is a bundle of nerves. A writer is a procrastinator extraordinaire.

At 3 am, an email from Auckland. As soon as I open it, I feel like I’ve known its contents forever. My editor’s distress blots out everything that I’ve imaginarily written over the past three days of rubbish-sorting, gum-perusing, and mental running-in-place.

I’ve been writing The Divorce Diaries for over five years, filing every month: from home, from airports, from hotel rooms or borrowed studies and once from a hospital. It and its readers have been a big part of my life. Now, in a second, all this has gone. My column is over, because the magazine is over. Covid-19 has chewed up and spat out a large portion of the publishing world in Aotearoa New Zealand. My editor is out of a job. My trusted subbers are out of jobs. My fellow columnists are out in the cold – and so am I. What’s easy to forget sometimes is this: writing feels essential, but in a commercial world it’s deemed less so.

I lie on my bed, flat on my back, arms by my sides like an effigy on one of those vast stone tombs in Westminster Abbey. My eyes are open, staring into a blank near-future. My cat sits beside me, gazing dispassionately at my face. ‘I hope you’re good at catching prey,’ I say to his chubby visage, ‘because it might be wartime rations for a while.’ He steps onto my stomach and lies down. It’s comforting being pinned to the bed in this way. There’s nothing I should be doing now anyway, except letting out the sentences that have been swelling inside me like a helium balloon. Sssssssss. Opening sentence gone. Sssssssss. The joke in the first paragraph – and sssssss, the echo of the joke in the second. Gone, gone, gone.

I lie motionless under seven kilos of cat, slowly expelling words. I think of my sister who went to sleep like this every night of her teenage years, on the dot of eleven. Lying on her back under a scratchy green cover, her arms ramrod-straight outside the sheets, eyes closed, lips pursed: ready for instant launch into sleep. Her no-nonsense body echoed the way her pens and pencils lay on her desk, in strict, neat lines. I used to think she was weird. Now I emulate her. Bodily control is approximate to calm.

Nico rises and falls with my breath. The night ticks on towards a recovery. Writers are often dented, scratched, even bent out of shape. But usually we’re survivors. We’ve learnt to be. Learnt how to come through and out the other side. Writers, like the words we love, tend to be indestructible.

A journalist friend of mine once said: Columns come and columns go. As far as I know, no column of his has ever actually gone, because he’s a great columnist and no editor would dare to face the wrath of his fan base. But he spoke the truth. Newspapers, magazines, blogs, vlogs and zines – they swoosh in and out of the world. Open and close like flowers that display themselves only from morning to sundown.

All the same, as I wake to a muggy Saturday morning and hear the bathwater of my neighbour upstairs rushing through the pipes near my head, just for a second I wish that I, too, could be swooshed down a drain and disappear. Job insecurity is nothing new to a freelancer. But trying to decide where to go next – and worse, trying to decide quickly before the wolf arrives at the door – is one of the least fulfilling parts of the writing life.

Out in the street, the protestors are already gathering. Another weekly demonstration against – what? Against Corona restrictions, or the easing of restrictions; against the closing of borders, or borders that are too porous; against people who hold the wrong passports or no passport at all, those who’ve arrived with bruises on the soles of their feet, clouds in their eyes and weights on their tongues.

I get out my anti-rightwing-demonstrator posters and tape them up in my windows. This is already a routine. In the left window, #Stay Home; in the right, Without Us! The woman across the street is out on her balcony, attaching her homemade banner to the railings: We are not your backdrop! She lets it unfurl over the side of the building, looks up and waves at me. I wave back through glass. Nico stands on his hind legs like a circus pony, reaching for the edges of the rustling paper. And then it happens. Words start up in my head again. It’s a compulsion. You can’t stop training, even if you have no current race to run.

The sun glints off the police visors and turns the skylights of incongruous penthouses on top of old brick buildings to silver. Columns come, columns go. And columns come… I step out onto my balcony. Grit under my feet, light in my eyes. Writers are phoenixes. Writers rise. 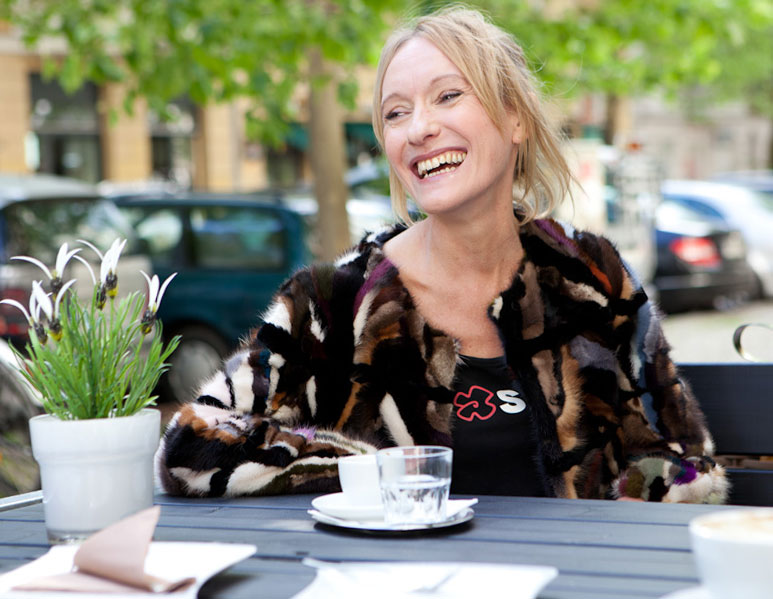 Sign up for my monthly newsletter by entering your email address below.